How I Wish the Big Wheels Would Keep on Turning 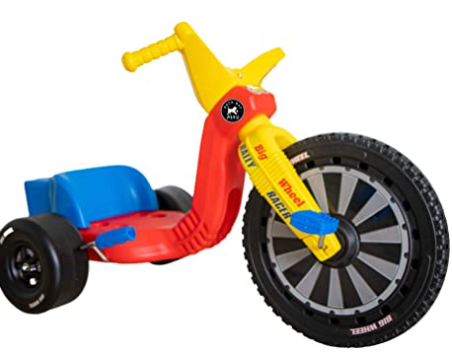 I read a fellow slicer’s post today, but I forgot to write her name down, so I don’t know who to give credit to for my post. She described activities she used to do but struggles to find time to do them without feeling guilty. It made me think about activities I used to do growing up I longer do – not from being too busy, but just have outgrown. For better, for worse.

5: Earl Weaver’s Baseball. We are talking floppy disk! I loved this game. It gave you options of different eras allowing you to play for teams with Ruth, Mantle or Aaron and Clemente. I mainly chose to play with the current rosters and spent hours upon hours plugging in data from all 792 cards from my1988 Topps set. As accurate as I wanted the rosters to be, I’d finagle with some of my favorite players. I believe Tony Gwynn had over twenty hits in one game while Henderson stole a base a dozen times. Those pixelated players were my heroes.

4. Basketball. I still shoot around. My oldest daughter isn’t so easy to beat anymore, but I still enjoy it. When I was younger, it gave my imagination a chance to shine. Grabbing the ball from the garage, I’d dribble our to the court, the bounces echoing throughout the forest. I’d be out there for hours playing one-on-one with myself as I pretended to be Barkley, Jordan, Webb, Wilkins, Magic etc. Often, it’d be snowing, but I kept playing. All the players felt real, and the atmosphere of being in the middle of the woods was peaceful. No annoying brothers.

3. Movies. I used to watch movies over and over again. Rocky, Star Wars, Goonies. I watched Pee Wee’s Big Adventure forty-four times before I lost track. Robin Hood (1991) nearly fifty. Back to the Future trilogy? Who knows? Now, with so many good shows to binge-watch, once is enough for me. Usually. Plus, you didn’t realize how bad some movies were back then. The pickings are much slimmer these days. My patience, too.

2. Ice Cream. I’m not talking about a couple of scoops with sprinkles. I’m talking about my post-soccer game mountain of junk where the scoops, as large as they were, still got buried by the smorgasbord of junk we had in the kitchen. I grabbed the chocolate syrup, peanuts, sprinkles, marshmallows, Oreos, pretzels, M&Ms, Lucky Charms and raisins. And never gained a pound. Today would be different. I think my scale would boycott flashing me the red digital numbers if I still did that. But, boy, what a treat!

1. Big Wheel. This was the best thing about my childhood. I remember the plastic wearing away on the wheels and the sound of gravel crunching beneath the three wheels as I went around and around, back and forth all day long. I thought there could be nothing better in life. Then the upgrade came -a hand brake on the side. Whoo-wee!

I wish I enjoyed video games (I like MarioKart, but that’s it). I wish I had more patience for movies and that ice cream piled in junk was healthy. I wouldn’t mind shooting b-ball more than I do, but man, do I wish I could still ride a Big Wheel.

This one is really great. I can see you doing that "stuff". Your descriptions are very vivid, and I don't think it's because I know you. Keep up the good work.

This slicing idea has got me thinking too--about how I could immerse myself in certain activities when I was younger and become so engaged that I didn't even notice time passing. Even the pleasure of watching a movie on repeat (how many times have I seen Big Trouble in Little China?!) is something I don't find it easy to replicate anymore. Thoughtful and engaging slice!

Ryan S. Graybill
I have been blessed with a beautiful family. Angie and I have been married for nearly twenty years. We have three daughters. Madison is a new driver at 16, Bailey is 13 and Sophie is 11. Currently, I teach 3rd grade. I just earned my MA in Creative Writing from SNHU. My goal is to become a full-time writer of novels, short stories and screenplays, and teach writing at the collegiate level.